According to the latest state of scientific knowledge, the mollusc group is estimated to count about 55,000 species in eight different classes. Judging from their outward appearance many molluscs would not be recognized as relatives to each other.

Who then would recognize a squid shooting through the sea with lightning speed to be related to a snail crawling its way in, well, a snail's pace? They appear as different from each other as from a mussel sitting silently on a lake's bottom. All the same, all three animals are related to each other, as are the 70 feet giant squid and the snail a millimetre in size.

The common body plan all those animals share has led the French naturalist Georges Cuvier to found a new embranchement (which in modern times is referred to as a phylum), the Mollusca, meaning "soft animals", from the Latin word mollis for soft. On the other hand, by the way, the field of biology dealing with molluscs is called Malacology, from the Greek word malakos, also meaning soft.

But not only the biology of molluscs is an interesting field. In ancient times a valuable colour – purple – was gained from thousands of marine shells. Purple was then a colour reserved to the elite regiments of Greek hoplites as well as to the senatorial class of ancient Rome. Some mussels produce pearls, which have been used in the fabrication of jewellery, as is the mother of pearl – the innermost layer of the hard mussel shell.

Archaeological findings point to the fact that molluscs have been used since the dawn of mankind: Mussels and later snails were collected for eating, as well as for the fabrication of tools. Today they are bred in aquacultures and snail farms. Even today certain ethnic groups use sea shells as ceremonial trumpets.

Despite all those interesting facts the molluscs are among the least known animal groups. It is this homepage's goal to change that and to wake your interest for a fascinating group, whose life often enough takes place in secrecy. 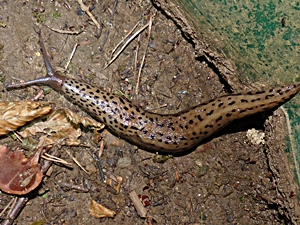 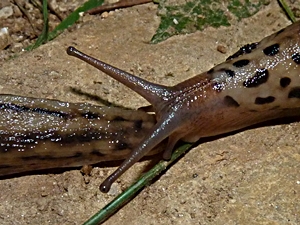 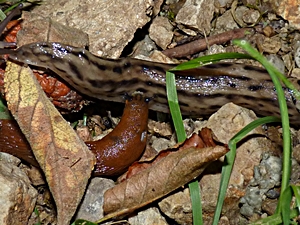 News: The page on the leopard slug (Limax maximus) has been completely revised, freshly translated and filled with a lot of new pictures by Martina Eleveld, even with a new playlist of videos on our YouTube channel!

"I just had a look at your mollusc page and you have a great reference website. Nice work." - Dave Harasti (http://www.daveharasti.com).

http://www.mollusca.net: The rich site of the DMG about mollusc research.