Thorn snails are in the superfamily of the coast snails (Ellobioidea), primordial pulmonate snails with a short conical shell, most of which are still living on salt marshes near the coast, such as the mouse-ear snail (Myosotella myosotis). Coast snails demonstrate one of the possible evolutionary paths that may have led to the development of terrestrial snails: The direct transition from the sea to dry land, without going through fresh water.

There is only one family of coast snails actually living on dry land. Those are the thorn snails (Carychiidae). Among them there is the genus Carychium, but also the genus Zospeum with about 20 species of blind snails living in caves.

Description: The very tiny herald thorn snail (which is why it is called "minimum") has got a water clear shell, which after the snail's death very fast becomes opaque and then will have a matt white colour. The whorls are well rounded outside, the last whorl is bulbous. Generally the shell diameter amounts to more than half the shell height, in contrary to the dentate thorn (Carychium tridentatum), where it is smaller. The shell aperture is strengthened with three teeth, one on the palatal (right) side, one on the columellar (left) side, and one on the parietal (upper) side.

Thorn snails may be hermaphrodites, but they mate only in one direction. The snail functioning as female will have its penis reduced. The eggs are very large for a snail that size (Diameter ca. 0.4 mm).

Habitat and Distribution: The herald thorn snail inhabits constantly wet biotopes, mostly near water, where it lives under moss, wood and stones. Often the shells can be found in alluvial deposits, where snails shells have been placed by the river water. Carychium minimum practically lives amphibious, it can also tolerate flooding for a longer period of time. Much less tolerant it is towards falling dry, which explains the threat to those species by sinking ground water levels.

This species distribution area covers all of Europe with the exception of the Mediterranean peninsulas. In North Europe the herald thorn snail may be found beyond the 60° latitude (Sweden: 63° N. L., Finland: 65° N. L.), but less frequently and mainly near the coast. In Switzerland the species appears on an altitude of up to 1800 m MSL. 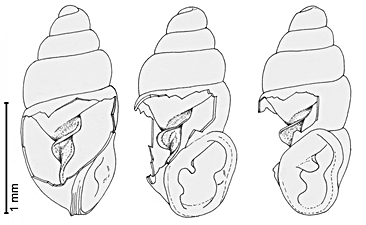