The small and medium sized snails of the Helicidae family come in many different colours. Because of their sometimes present characteristic bands those snails are also referred to as banded snails. Their richness in colours and patterns is astounding even for gastropods, taking into account that there are many colourful species of marine gastropods or sea shells.

The other two species of banded snails in Central Europe are the Alpine banded snail (Cepaea sylvatica), occurring from the higher altitudes in Switzerland down to the Upper Rhine Valley, and the Viennese banded snail (Cepaea vindobonensis) appearing in an area neighbouring to the East, from Vienna (as the name says) and the rest of Eastern Austria to the Balkan Peninsula and the Black Sea.

There are different ground colours between yellow, rose, red and brown, also there are different types of banding, from unbanded forms, single band forms up to multiple band forms, such as five bands. Contrary to all this variability, an anatomical examination, especially of the genital apparatus and the love dart, will prove that it is always the same species.

That means that an unbanded yellow grove snail (Cepaea nemoralis) is always more closely related to a rose coloured, five-band other grove snail than to an equally unbanded and yellow coloured garden banded snail (Cepaea hortensis), because the former two belong to the same species, though they look different, and the latter two belong to different species, though they look similar.

But how could shell colour evolve to such a variability, unique among the species of European terrestrial pulmonate snail species (Stylommatophora)?

Several genes of grove snail's (Cepaea nemoralis) shell colour are located on the same chromosome and therefore usually are inherited in combination.

There is the gene C for the shell's ground colour, described with several alleles, such as brown, rose coloured (pink) in different stages and yellow. Another gene on the same chromosome is B for the presence or absence of bands, with two alleles: B0 for an unbanded shell and BB for one with bands. Further genes comprise the gene I for punctuate (discontinuous) bands, S for a spreading of band pigment and P for the pigmentation of bands and apertural lip, which can be dark brown, as is typical for the species, light brown or even white or translucent.

Further genes are located on other chromosomes, and so they are inherited independently from the formerly mentioned genes, as well as from each other, as far as the available information allows the conclusion. Among those are the genes U for the suppression of the bands 1, 2, 4 and 5 (which leads to the existence of a single banded variety), T for the suppression of the 1. and 2. bands, D for the pigmentation of the soft body's skin, R for a gradual darkening of the bands from apex to aperture and finally O for orange coloured bands.

The dominance relationships between the different shades of rose or pink are insecure. Only those colours are difficult to determine in the field anyway. Sometimes a banded snail's shell colour can be determined clearly only by scratching away the shell skin (periostracum).

According to the findings of those genetic examinations, in nature mainly brown, unbanded grove snails should occur.

The result of a snail counting in Bad Kreuznach in the German state of Rhineland-Palatinate (Nordsieck, R., 2009, Diagram D1) as part of the Evolution Megalab (see further down) proves, however, that this is not at all true. Of almost 70 snails counted on a wall overgrown with ivy, the large majority was yellow and unbanded, followed by yellow, single banded snails and yellow snails with five bands. Brown snails were not found at all.

A more valuable statistics is given by the counting of a larger number of banded snails as part of the Evolution Megalab in Berlin (Brugsch, M. and Nordsieck, R., 2009, Diagram D2) on a comparable wall. Here as well yellow snails made by far the majority (186 of 274 snails, equalling about two thirds). But here the largest part (nearly half of all counted shells) was yellow and had five bands, which according to genetics makes a combination of no less than three recessive traits - yellow, banded and five bands!

That the genetic bases of shell colouring in banded snails are not expressed in nature as they should, is for ecological reasons.

Banded snails, as well as many other snail species, are among the favourite prey of numerous species of birds, among them the song thrush (Turdus philomelos). Those birds hunt on sight and so they catch and eat those snails most, which are seen first in the vegetation. The snails better camouflaged in front of a given background survive and are allowed to breed.

They look out for a special stone (also a kerbstone or a piece of wall), which they use to crack shells of banded snails they caught to reach the nutritious contents. In nature we can recognize those stones by the numerous broken snail shells around them. They are also called thrush anvils.

Dark specimens of banded snails turn out to be least visible on dark underground such as earth without vegetation. Yellow specimens disappear in bright open grassy areas, whereas the banded and rose coloured specimens are camouflaged best on the branches of bushes and shrubs.

Because vegetation in nature is so various, there are always the specimens camouflaged worst to be eaten and the others to survive and to reproduce. Those see to the survival of the species.

Additionally there is a seasonally different selection by predators: In the seasons, where the vegetation is lessening, the more brightly coloured snails are caught and eaten to a larger extent than the inconspicuous brown specimens. On the other hand those become conspicuous when the vegetation grows, thus relieving the brighter varieties.

Apart from the decisive advantage of camouflage in different habitats, it should not be left aside that the different colours of banded snail shells also have different capabilities of reflecting the sunlight (a meteorologist would call this albedo). The black and white shells of heath snails (Helicella itala and Xerolenta obvia, for example) and zebra snails (Zebrina detrita) show especially well snails of warm and dry habitats (xerophilous snail species) to have light coloured shells. Brown coloured specimens of banded snails are in a disadvantage compared to their yellow coloured conspecifics, because of higher evaporation and consequently higher water loss. So the rate of yellow varieties of grove snails declines towards the North.

Most interestingly, freshly hatched banded snails are unbanded, the bands appearing but some weeks after hatching.

In the Darwin year 2009 the previously mentioned project "Evolution Megalab" had been given the task to document the different forms of banded snails (mainly Cepaea nemoralis, but also Cepaea hortensis) in their relation between different shell colours (yellow, pink and brown), as well as banded patterns (unbanded, single banded and multiply banded). Those results (like shown in the diagrams D1 and D2), acquired with the help of several thousands of voluntary field workers, afterwards were to be compared to historical results, the main part of which had been collected between 1950 and 1990 (about 10 to 30 generations of banded snails), in the hope to find an evolutionary trend.

A part of the historical question also was, whether the increasing decline of the song thrush (Turdus philomelos) populations, due to human caused changes of its habitats, had had consequences on the selection of banded snails by predation and so had changed their development.

If today it is not the song thrush, inflicting selection on banded snails, then which bird species have taken its place. Or possibly nowadays it is another, so far unknown, factor? Also climatic factors, as a consequence of the growing global warming, were supposed to be researched.

The recent publication of the research results has revealed that the relation of colour and banding patterns of grove snails has indeed changed and that this has taken place at an astonishing speed.

Against the first assumption, the relative amount of yellow colour varieties of grove snails, the form with the highest albedo, has not increased, except for open dune habitats. The assumption is that in other habitats, an adaptation to the increasingly warm climate in the temperate zones (in Europe about 1.3 °C during the 20th century, with a decisive increase between 1990 and 2009) has taken place by a change in the snails' heat regulation behaviour (also see "Senses and Sense Organs"). However the already known differences between the the amount of light and dark colours, banded and unbanded forms of snails in open and woody habitats, could be confirmed.

The unexpected increase in single banded forms compared to unbanded forms of snails is said to be caused by a change in selection pressure due to predation and by the changing microclimate in altered habitats.

The success of banded snails in nature still speaks for itself. And there seems to be no end to the multitude of colours possible.

(Article published on the Blog of molluscs.at!)

The Europe-wide banded snail project in the Darwin year 2009. 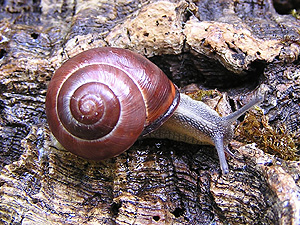