There is also a giant squid among the illustrious exhibits in the Stralsund Ozeaneum.

For centuries mysterious giant squids have made their path through myths and sailors' tales. For a long time those creatures have been thought to be monsters sinking ships and devouring people. It was not until in the year 1857, that the giant squid gained entrance into the catalogue of scientifically described animal species as Architeuthis dux. So far no human has seen such a giant in its natural habitat, the deep dark vastness of the higher deep sea.

2005 was the first year, an Architeuthis giant squid could be seen in an exhibition in Germany. During a family Sunday in the German Oceanographic Museum the animal was uncovered in an exhibition tank several metres long and presented to the public. By the help of the squid expert Volker Miske from Greifswald, the German Oceanographic Museum in Stralsund on the Baltic Sea was able to acquire one animal from New Zealand.

The male specimen, 6 metres (18 feet) long had been delivered by New Zealand fishermen to the squid expert Steve O'Shea at the Auckland Technical University. Volker Miske, who works as an maritime zoologist at Greifswald university, travelled to New Zealand himself to research the conditions of the catch and to prepare the animal for transport to Germany together with Dr. O'Shea.

In the Oceanographic Museum the professional final preparation of the giant took place, before it got to its place in a special exhibition hall. A special new exhibition unit "Giant squids - Giants of the Deep Sea" gives insight into the mysterious world of giant squids: Where do they live, how are they built and which special characteristics do they possess? Is it really true that giant squids can sink ships?

Today the giant squid, together with a sperm whale fighting a giant squid, can be seen in the exhibition 1:1 Giants of the Seas in the Ozeaneum on the Stralsund harbour island. Only about 20 museums all over the world show giant squids.

The German Oceanographic Museum in Stralsund is the largest Natural History Museum in Northern Germany and with 600,000 visitors per year also the best visited. Its exhibitions are displayed in an early Gothic monastery church of the Stralsund St. Catherine's monastery. It is an architectonical gem for itself. The extensive and modern exhibitions give comprehensive and demonstrative insight into marine life, as well as its use and research by man. The exhibitions on marine life are impressively completed by a fascinating diversity of domestic and tropical sea creatures in 45 aquarium tanks. 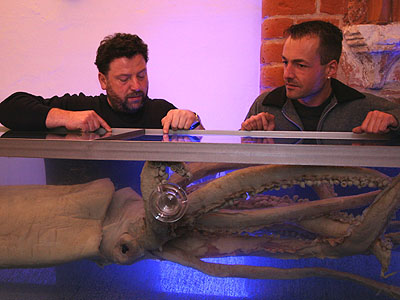